Kanji for Tokyo is 「東京」. Tokyo, pronounced Tōkyō in Japanese, is the capital of Japan.

However, its history as the official capital is shorter than you might think.

It was in 1868, the year of 明治維新(Meiji Ishin, the Meiji restoration)

, that the capital moved from Kyoto to Tokyo as the Emperor moved its residence. Before that, Tokyo was called「江戸」(Edo)

’s rule in Edo in 1603, Edo was the center of Japanese politics and economy.

, the top of a Shogunate.

*「幕府」(Bakufu), or Shogunate in English, is the noun for the military governments that ruled Japan from 1192 to 1868.

「東」 means “east” and 「京」means “capital.” Therefore, the name 「東京」has the meaning of “the eastern capital,” since Tokyo is located east of Kyoto. 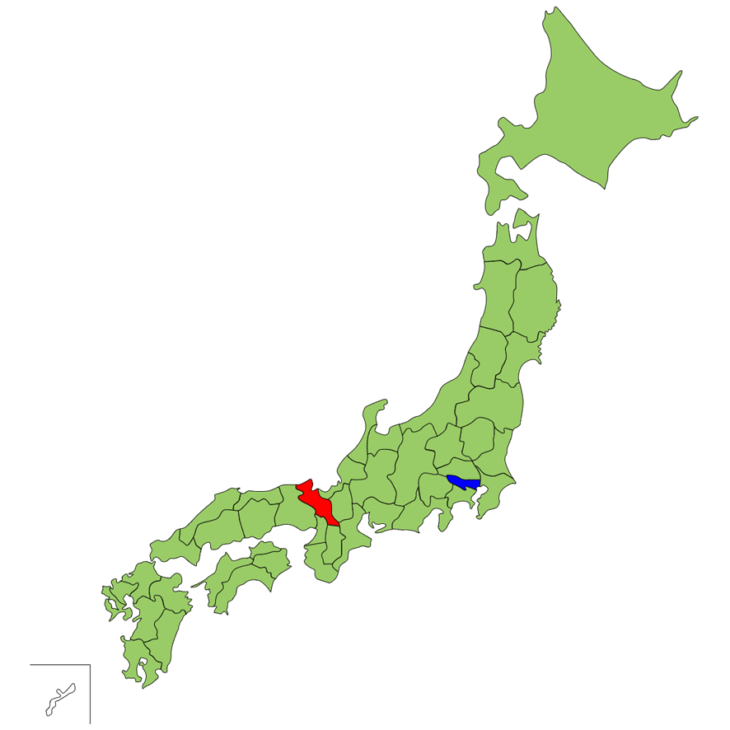 Nowadays, Tokyo is the name of a prefecture. The prefecture is called 「東京都」(Tōkyō-to)

. Only Tokyo uses「都」(to) for the English word “prefecture.” Other prefectures are called 県(ken), 府(fu), or 道(dō). In English, 東京都 is called the “Tokyo Metropolis” or “Tokyo Metropolitan area”; however, it is the same as a prefecture as an administrative district.

There used to be a city called 東京市(Tokyo city), but now the area is called 23区(Nijūsan-ku) since 1943 when 東京都 was made by integrating 東京府 and 東京市 that existed from 1868. 区(ku) means “ward.”

Meanings of the two characters

If you are interested in writing big numbers in Kanji, please see our article below for further information:

How to write numbers in Japanese – Vertical writing and horizontal writing

Origin of the characters

京 is a pictogram of a house built on a high hill. It means “high hill,” “capital,” or “big.” The other Kanji characters that have 京 as a block to show the sound, for example, 景(kei), share the meaning of “a big, high hill.”

How to distinguish the old and the new capitals

The Kanji characters for Kyoto is 「京都」, and both 京 and 都 means “capital.”

Nowadays, when you say just「京」(Kyō) in one character, it means Kyoto, and when you say「都」(To), it means Tokyo. However, the verb 「上京する」(jōkyōsuru) means “to go to Tokyo.”

「上」means “up.” The word comes from the custom that the nearer you get to the capital or a prosperous place, it is considered that you are moving upwards, and the further you get, you are moving downwards(「下」meaning “down”).

This way of thinking appears when describing the transportation, for example,「上りの電車」(Nobori no densha, inbound train) and 「下りの電車」(Kudari no densha, outbound train). 「電車」(densha) is a Kanji compound of 電(electricity) and 車(car), meaning “train.”

東京 means “the Eastern capital.” What about the Kanji for other directions?

All together, they are called 「東西南北」(tōzainanboku)

There are other places named by combining “the direction” and “京” besides Tokyo.

For example, 北京 (pronounced “Pekin” in Japanese) means Beijing and 南京 (Nankin) means Nanjing in China. They are written in the same ways in Chinese too. It is irregular to read 北 as “pe” and 京 as “kin” in Japanese, and it is read so only when speaking about the name of the two cities, or the nouns with their names like 北京ダック(Pekin dakku, meaning Peking Duck).

There are many places called 西京 or 西ノ京 as their official name or alias. The most famous place with the name 西京 in Japan is the 西京区(Nishikyō-ku) in Kyoto City.

If you would like to know how to describe the directions between 東西南北, please read the article below.

The sound of “Tokyo” for Japanese people

On April 1st, 2020, Tokyo’s population was more than13 million, and that was more than 10% of Japan’s total population, which was 125 million on the same day. The population density is extremely high. Furthermore, many people commute to work or go to school in Tokyo from the neighboring prefectures such as Chiba, Kanagawa, and Saitama. The area that includes Tokyo and these prefectures is called 「首都圏」(Shutoken), which is called “the Tokyo Metropolitan area” in English. 「首都」(shuto) means “capital,” and 「圏」(ken) means “area.” The commuting trains are unbelievably crowded and are called 「満員電車（Man’in densha）」, meaning “jam-packed trains.” At many stations, there is even staff for pushing people into the doors of the train.

Actually, Tokyo is a city of “aliens.” Since there are many universities and jobs in Tokyo, people gather from all over Japan. There is a word 「江戸っ子」(Edokko)

, literally meaning “a person of Edo,” but you need to live in Tokyo for three generations to call yourself that way.

That is precisely the reason why Tokyo has been sung in so many songs.

According to this article, there are 841 songs that include “Tokyo” in their titles or lyrics.

The artists sometimes sing the hanker for living in the city by the people in the countryside, or the feelings of young people moving to Tokyo to make their dreams come true. Some sing the joy of living in the city, and others sing the people’s feelings missing their hometown from Tokyo. When you listen to Japanese music and hear the word “Tokyo” in the lyrics, please think about what kind of feelings the artist wanted to express.

Here are some videos of the songs with “Tokyo” in their lyrics. One is a famous tune in the 90s, and another is the latest hit song in 2020.

This song was a great hit in the 90s. It embodied the sophisticated life in Tokyo. The remix was used in the closing ceremony of the Rio Paralympics in 2016 to show that the next Paralympics will be held in Tokyo.

This song went viral through the Internet in 2020.

, meaning “a room of 6.5 jō in Tokyo at midnight.” 畳(jō) is a unit to count a room’s size, especially a Tatami room. 1畳 is about 1.82 square meters. Therefore, 6畳半(半 means “half”) is approximately 10.94 square meters. Many people live alone in an apartment with just one room of 6畳, a tiny bath, toilet, and a small kitchen in Tokyo. Therefore, this 六畳半 has some kind of reality, a person living in a smaller house than the other regions because of Tokyo’s high rent.

The title means “Telling that the spring has come.” People will associate this title with the hopeful atmosphere of the season changing from winter to spring, and the beginning of a new chapter in life. Schools and the financial year in companies start in April in Japan; therefore, spring is the season to start a new lifestyle.

However, this song is about the last day of the world. There is no portrayal of that kind of atmosphere. The title is intentionally used to emphasize the gloomy feeling and the sense of emptiness in the lyrics ironically, reflecting the mood of the year 2020.