There are three characters representing dragons: 竜, 龍, and 辰. 竜 and 龍 simply indicate the mythical creature; on the other hand, 辰 is a concept in the zodiac used in Asia.

Let’s see what the dragons in Japan look like and where you can find them (…well, not real ones ), and take a look at a mythological tale used in comics and video games.

The meaning of the characters

竜 and 龍 both mean “dragon” as a creature. It has a body like a huge snake covered with scales, horns, and sharp claws. It is said that dragons bring clouds and cause rain. 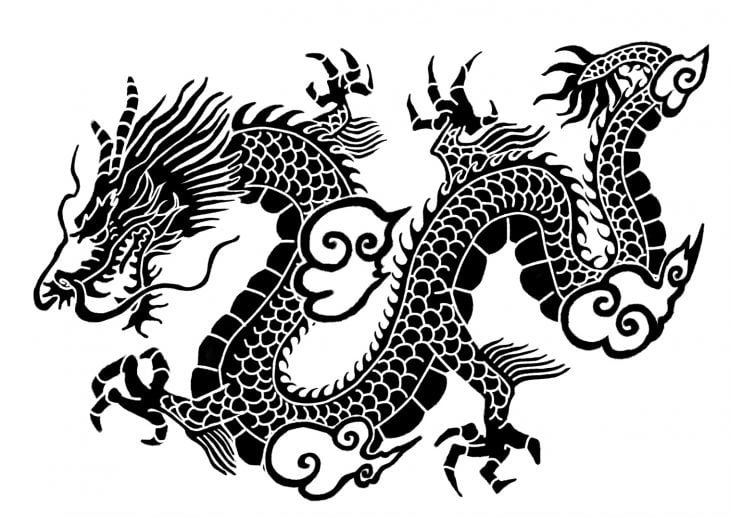 The concept of dragons originally came from Ancient China but changed something unique to Japan over time. From around the ninth century, Japanese people started to worship them to pray for rain. Also, dragons are the symbol of Emperors in China, but that is not the case in Japan.

These days, not so many Japanese people worship dragons for rain in their daily lives. But there is an event once in four years in 埼玉県鶴ヶ島市(Tsurugashima City, Saitama Prefecture) to carry a huge dragon made by bamboo and straws to pray for rain. for more detail

竜 is registered as 常用漢字(Jōyō Kanji, a standard for primary Kanji characters), and 龍 is the 旧字体(kyūjitai, characters which were used before but were not registered in some standards of primary characters by the Japanese government).

However, 龍 is still used by Japanese people. For example, Oolong tea, which originates from China, is written 烏龍茶or ウーロン茶 using Katakana. Its pronunciation is “Ūloncha.”

Both 龍 and 竜 could be used for naming children.

The shape of 竜 is based on the character used before the first emperor of the 秦(Qing) dynasty standardized the Chinese characters. Before the standardization, Chinese people used different characters depending on the region. Therefore, 竜 and 龍 are two characters with the same sound and meaning co-existing from more than 2,200 years ago. 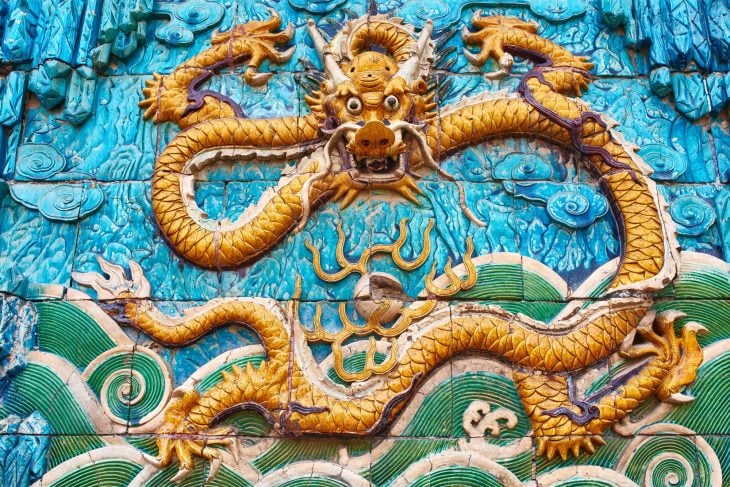 竜 could be used for both Western and Eastern(Chinese or Japanese) dragons. On the other hand, 龍 could only be used for Eastern dragons.

Therefore, these kinds of dragons in the illustration below could only be written 竜(Ryu) 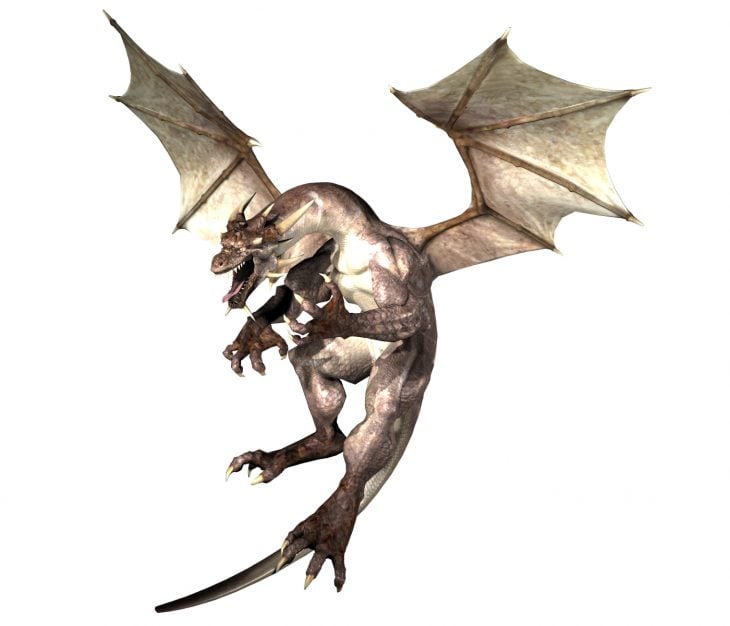 辰 has a different nuance. It represents the fifth element of the Oriental zodiac called 十二支(Jūnishi)

, consisting of twelve elements. Each element is in connection with animals relatively, and the animal (to be exact, the creature) for the fifth element 辰 is the dragon. The details of the 十二支 are to be mentioned later.

The origin of the characters

The character of 金文 is a pictogram of a snake with an ornament on its head. 龍 is a deformation of that. 龍 is a combination of of「⺼」(meat) on the left side, the right part meaning “to fly,” and an abbreviated shape of the character 「童」representing the sound.

辰 is a pictogram. Two legs of a bivalve are out from its shell. It is used for the fifth element of the Chinese zodiac.

Where you could find dragons in Japan

Dragons appear in many historical buildings, such as shrines or castles, since they are considered auspicious. They could be found in sculptures, for example, those of the gates or 欄間

(Ranma, a wooden panel with openwork carving used as a decorative transom above paper sliding doors). They appear in many paintings as well. 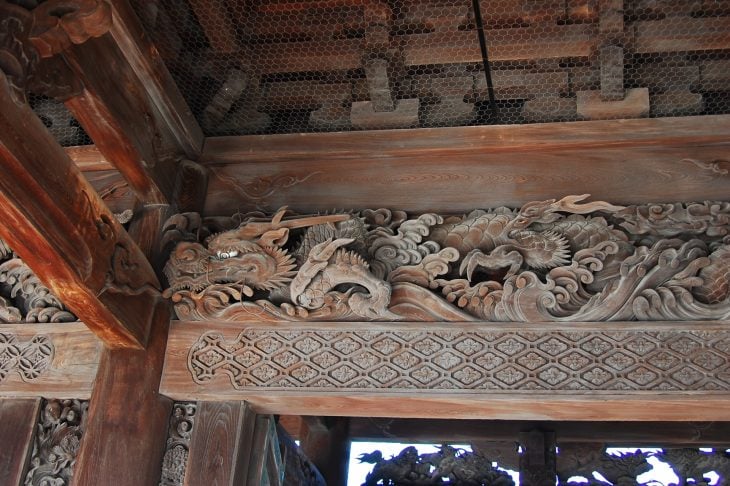 A dragon carved on Ranma

If you visit a shrine in Japan, you might see dragons at a 手水舎(Chōzu-ya or Temizu-ya)

, where you purify yourself with water before the worship. 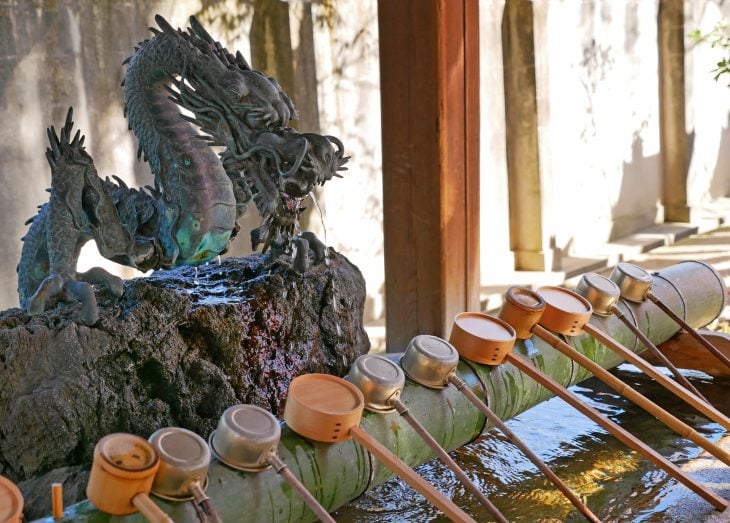 Dragons in the Japanese zodiac 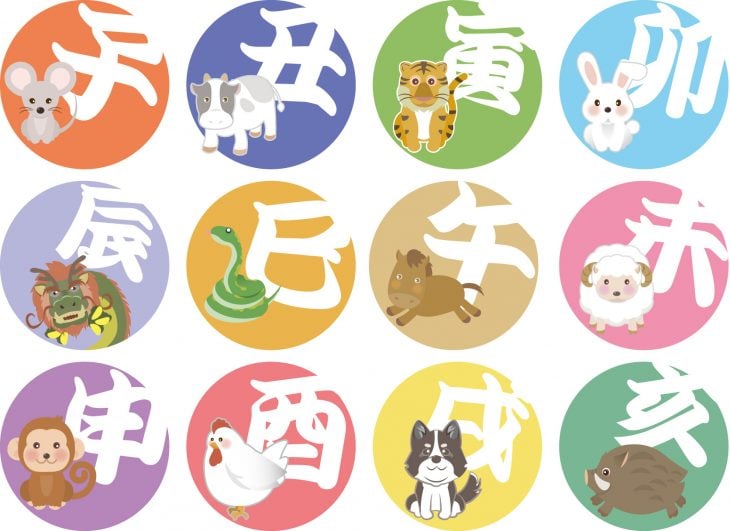 Animals in the Japanese zodiac

in Japan. It is a theoretical system that has been used to describe years, months, days, time, directions, and many other things.

Although using the word “zodiac,” the Oriental zodiac has nothing to do with constellations like in Western zodiac.

Nowadays, the zodiac is mainly used to present the animal of the year in Japan. Each year has its animal, and it is a 12-year cycle. For example, 2020 is the year of the mouse. The next dragon year will be 2024.

In Japan, most people don’t care about the zodiac in daily lives except for greetings for the new year. The birth rate is not influenced by the zodiac, except once in 60 years. Girls born in the years of 丙午(Hinoeuma) are considered to have a fiery temper, and people try not to give birth to their children in those years.

The mythological tale of carps turning into dragons

If you are a big fan of the comic ONE PIECE, you might remember a scene of huge carps climbing up the waterfalls when the Straw Hat Pirates tried to enter the Wano country. Or if you are a fan of Pokémon, you should know that Magikarp, a fragile monster that looks like a carp and could do nothing but to flop around, will evolve to Gyarados, a powerful monster that looks like an Eastern dragon.

Magikarp & Gyarados are based on a Chinese proverb about a Dragon's Gate atop a great waterfall. Lots of carp swim upriver, but only the most determined can leap up the final waterfall and pass through the Dragon's Gate. Those carp are transformed into dragons. pic.twitter.com/N0BftfhiCF

These kinds of story settings remind the Japanese people of a tale that a carp succeeded in climbing up a raging stream turns into a dragon. The tale is from the Chinese book Book of the Later Han (pronounced Gokanjo in Japanese and Hòu Hànshū in Chinese). According to the book, there is a raging stream called 竜門(Ryūmon in Japanese, literally meaning “Dragon gate”) in the upper flow of The Yellow River. Many carps gather under there, but most of them could not climb up the stream. If a carp succeeds, it will turn into a dragon. Therefore, there is a word 「登竜門」(or 「登龍門」, pronounced Tōryūmon) in Japanese which indicates a gateway to success.

Image of the dragons in modern Japan

Japanese people feel close to dragons. Generally speaking, they don’t have a horrifying image They are described as sacred creatures beyond human understanding. That is maybe because of the comic “Dragon Ball” in which a dragon appears that makes your wish come true if you collect seven “dragon balls” spread all over the world, or because of the movie “Spirited Away” by Hayao Miyazaki. If you would like to know more about how dragons are described in those works, please see it with your own eyes…because seeing is believing.

If you read Japanese comic books, you will find that dragons are drawn rather nice and gentle, no matter the shape looks like a Western dragon or Eastern dragon.