Kanji for cherry blossoms is 「桜」 and is pronounced “Sakura.” Cherry blossoms grow wild in a wide area in the temperate zones in the northern hemisphere, not just in Japan. However, the flower has always been special to Japanese people and has a strong relationship with Japanese culture valuing impermanence. Some say that Sakura is the national flower of Japan, although not officially recognized by the government.
In this article, let’s see the relationship between Sakura and Japan.

What is “Sakura” in the first place?

桜 means “cherry blossoms,” but they are for ornamental use and don’t produce any fruit. If you say just “桜,” it usually refers only to the flowers. If you want to talk about the tree of cherry blossoms, you should say “桜の木”(Sakura no ki). Many varieties are included in the concept, and the one most frequently seen in Japan is ソメイヨシノ “Somei Yoshino cherry.” 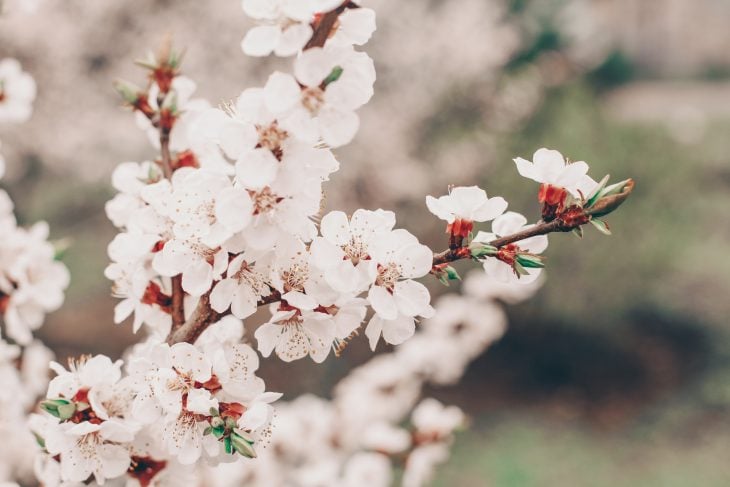 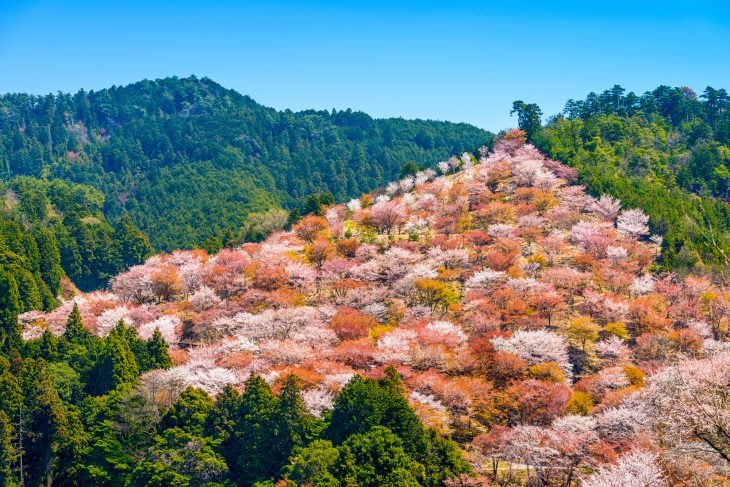 What is confusing is that although 桜 means “cherry blossoms” in English, it doesn’t bear cherry, which is called さくらんぼ(sakuranbo) in Japanese. The names are similar and quite confusing in both English and Japanese. Cherry blossom trees and cherry trees are in the same group of plants, but their varieties are different.

The origin of the character

The character of 桜, which used to be written 櫻, initially didn’t mean “cherry blossom.” It meant “Nanking cherry,” a different variety of tree.

木 means “tree,” and when it becomes a radical, it is used for the characters representing many kinds of trees, parts of trees, things made of wood, and the status of trees.

嬰 means “to wear a necklace,” therefore, the character 櫻initially meant Nanking cherry, which bears fruits that look like gems of a necklace.

In Japan, 櫻 is only used for people’s names today, especially family names such as 櫻井(Sakurai).

Ohanami – The culture to enjoy transient and impermanent beauty 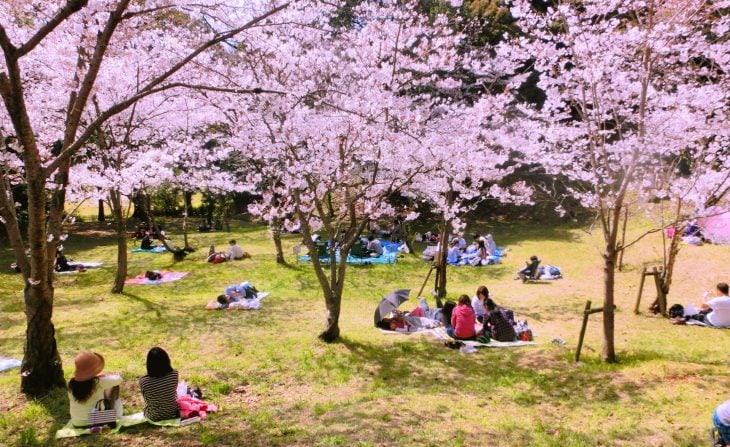 (Ohanami) or 花見(Hanami) literally mean “viewing flowers.” It is like a picnic under cherry blossoms. People gather and enjoy food or drinks together. Some people just enjoy wandering around the row of cherry blossom trees. It could be taken place either during the daytime or at night. The cherry blossoms seen at night are called 夜桜 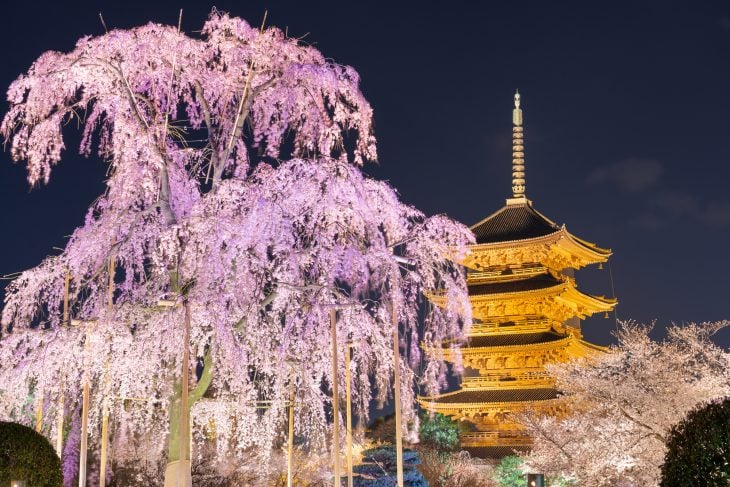 When spring comes, the weather forecast in news programs on TV starts reporting the estimates when they will bloom. Cherry blossoms begin to bloom from warmer regions; therefore, the flowering season entirely differs by the province. The problem is that, even in the same area, it varies by the year too. It depends on the temperature of that year.

There is a word 「桜前線」, a combination of 桜and 前線(zensen) meaning “weather front.” People stick to the news of 桜前線 and carefully see when the cherry blossoms start to bloom in their region to plan when to go out for お花見. 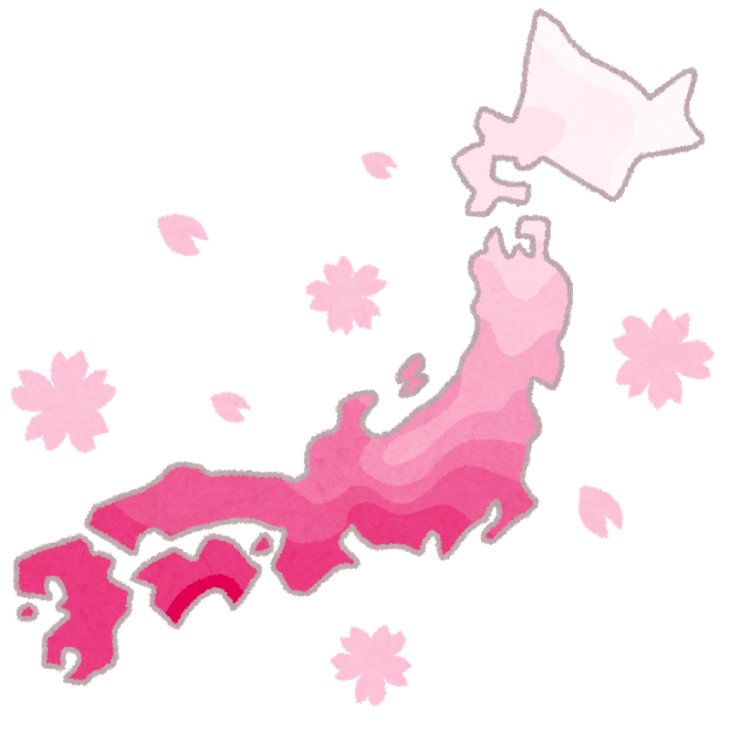 Cherry blossoms are also beautiful when they are blown by the wind. Their petals dance in the air. This phenomenon is called 桜吹雪

Please watch this video and see how fantastic it is.

Foods using 桜 for its name

桜 is also used for the name of a color. 桜色

(Sakurairo) means cherry blossom color, which is associated with the color of the flowers.

(Sakuramochi), literally meaning “cherry blossom rice cake,” is a pink rice cake filled with sweet red bean paste, wrapped in a pickled cherry blossom leaf. The leaf tastes salty, not sour. It is a seasonal sweet during the flowering season. 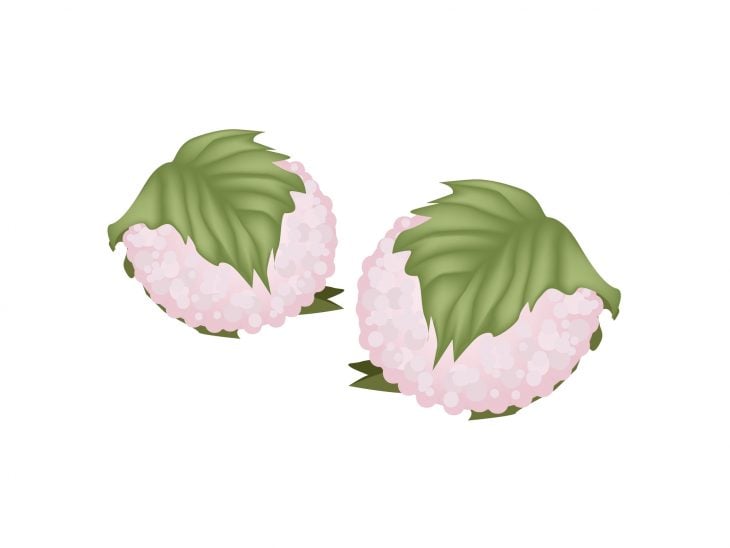 (sakuraebi), literally meaning cherry blossom shrimp. It is called “Sakura shrimp” in English as well. You can buy the dried ones at a supermarket. 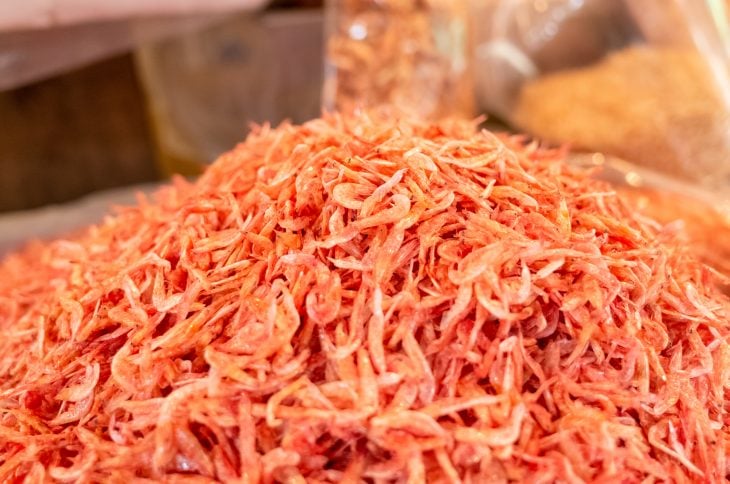 It is often served in sashimi style, and the dish is called 「馬刺し」

(Basashi). Kyushu region is famous for the dish. You might be able to find it in some of the 居酒屋

(Izakaya, Japanese-style pub) in the other areas too, but I suggest you search for an 居酒屋 specialized in Kyushu cuisine because most of those 居酒屋 have 馬刺し on their menu. 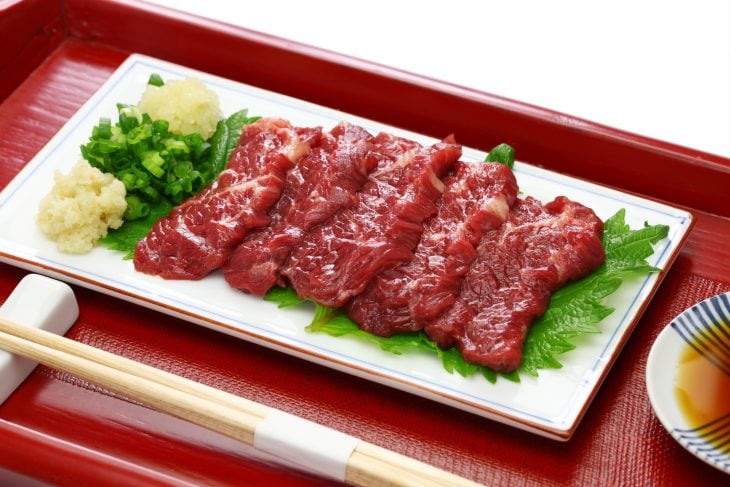 Basashi is usually served with grated garlic and grated ginger.

There are several theories about why horse meat came to be called 桜肉. One of them says that it is because the color of the fresh meat just after opening with a knife looks 桜色. Another says that “horses eat much in winter, therefore they taste delicious with a lot of fat in spring.”

Seeing Sakura blossoms during a short visit to Japan is quite a challenge. I wish you good luck!

As explained above, it isn’t easy to forecast when the cherry blossoms start to bloom, and they last for about only a week. Unless you are a person who could go on a trip whenever you want and buy a flight ticket as soon as you get the news that they started to bloom, it isn’t easy to see them blooming in Japan during a short visit. If you were able to see it, you’re lucky!

It means that “If cherry blossoms don’t exist at all, I could stay calmer during springtime.” People are very excited about when the cherry blossoms start to bloom and worry when they will fall off. From this poem, we could see that Japanese people have appreciated the transient beauty of Sakura from more than 1000 years ago.