Cats are loved in Japan the same as in many other countries.

The Kanji for cats is 猫.

In this article, let me introduce words and idioms using 猫, breeds familiar to Japanese people, and a traditional cat figurine.

The origin of the Kanji

Some words are using the cat’s characteristics.

There are some breeds familiar to Japanese people. They are called 和猫(Waneko) or 日本猫(Nihonneko). Let me introduce some of them to you.

Are you a cat person or a dog person?

So, the question above is like this in Japanese:

「派」(ha) is a Kanji character for “a group with the same thoughts.” For example, it is used for the word 派閥(habatsu), meaning factions in politics. There is a similar question like 「あなたはそば派ですか、うどん派ですか」(Anata wa soba ha desu ka udon ha desu ka) 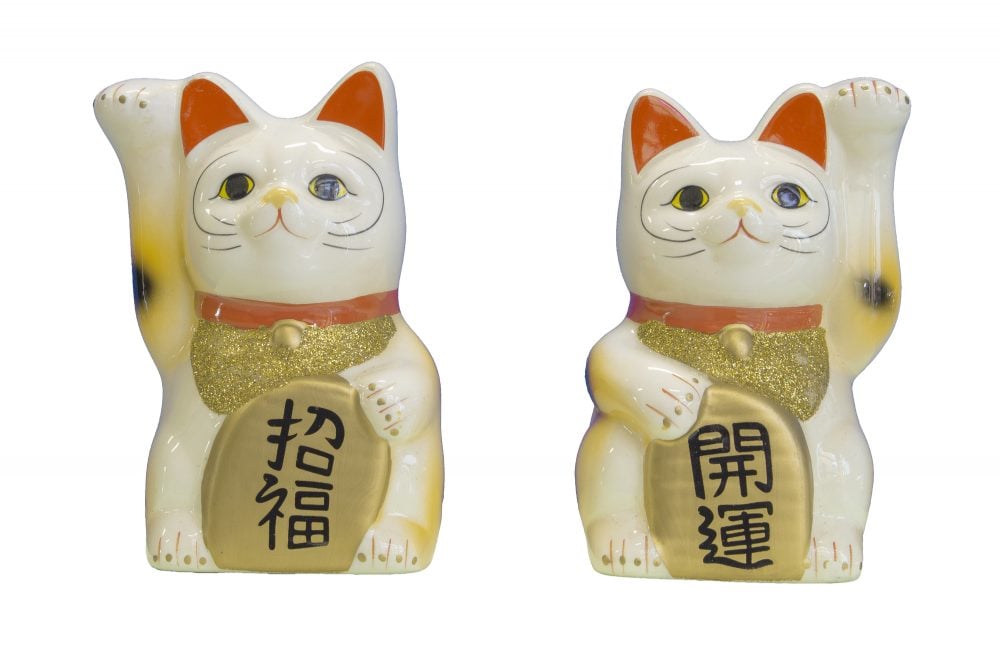 Have you ever seen a cat figurine that looks like this? It is called 招き猫(Manekineko) and is believed to bring good luck. 招く(maneku) means “to invite.”

To understand why they look like that, you first need to understand the difference in the gesture of asking people to come over. In English speaking countries, the gesture for “come here” looks like this, right? 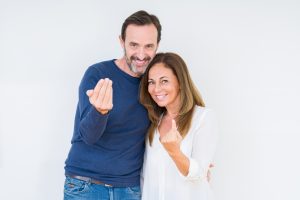 But in Japan, you need to turn your paw dawn and wave a few times to beckon someone. 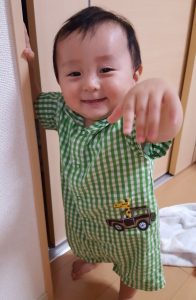 Manekineko is a kind of figurine that is very familiar to Japanese people, and you can find them in many privately run shops.

If you want to see hundreds of them, try visiting 豪徳寺(Gōtokuji) temple and 今戸神社(Imado jinja) shrine in Tokyo. You will be overwhelmed with the numerous Manekineko. 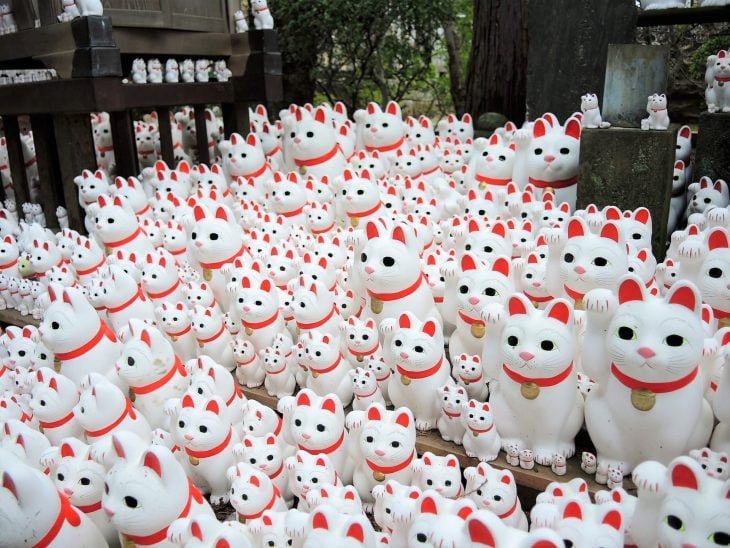 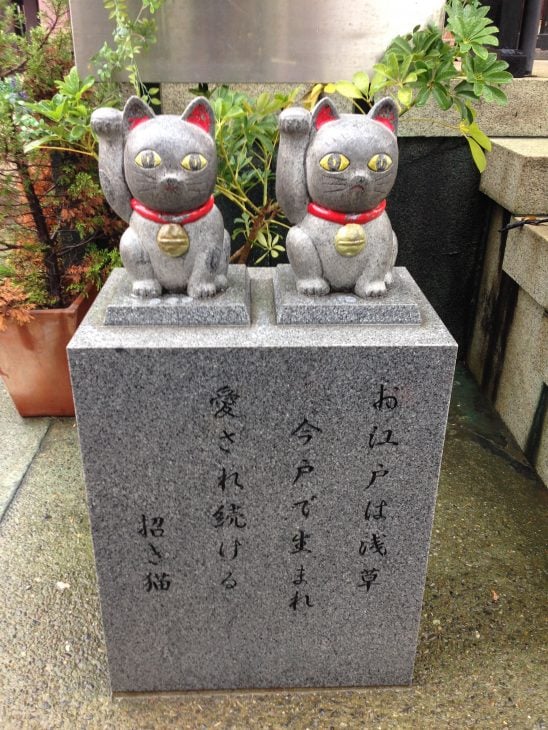 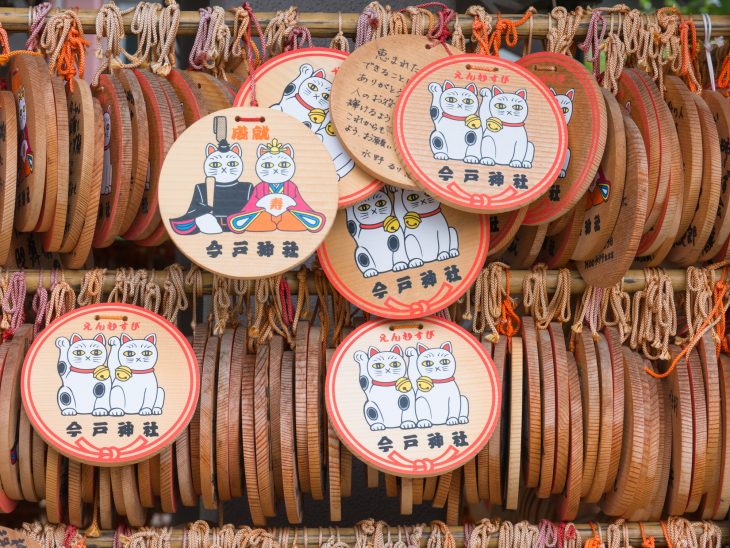 絵馬(Ema, wooden boards which people write their prayers or wishes on) in 今戸神社

How they live in Japan

There are some small islands called 猫島(Nekojima), literally “Cat Island.” You can see so many cats on the island as if there are more cats than humans. In most of these islands, the fishing industry is prosperous. You can see many cats relaxing in a peaceful town on the island. 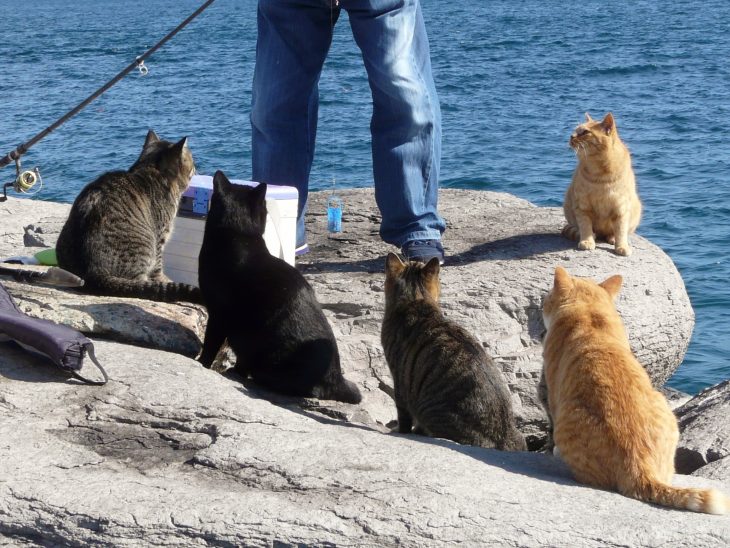 Cats coveting fish near the fisherman

Lastly, I would like to introduce a music video of the song「猫の惑星」(Planet of cats) by 打首獄門同好会(Uchikubi Gokumon Dōkōkai). They collected videos of cats from all over Japan and made this video. By watching this, you can know how cats in Japan act in their houses. They stay in こたつ(Kotatsu, a heated foot warmer table with a blanket), sit on a bathtub lid or in front of the stove (because it’s warm there!), and break 障子 (Shoji, paper sliding doors) and 襖 (Fusuma, sliding doors). That should be unique to Japanese cats because of the house structure in Japan. However, sitting on keyboards, scratching the sofa, and diving into bags and boxes should be universal.

As the lyrics say, “We were born on a planet where cats live, and we are drowning in love for cats.” That’s true for cat lovers!