Coffee is said to be imported to Japan in the mid-seventeenth century by Dutch. In modern Japanese, there are two ways of expressing coffee, 「コーヒー」in Katakana and「珈琲」in Kanji. Both are pronounced “kōhī.” What is the difference? And where in Japan can you find those words?

Let’s take a look at the coffee culture in Japan– an addictive drink that is also loved by Japanese people.

Both are 形声文字(Keisē moji), which means “semasio-phonetic” characters. Typically, they consist of two blocks. One indicates the meaning, and another suggests the sound.

In the picture above, 非 is a little bit different from how Japanese people write by hand.

The difference in the fonts causes this. 非written in a font for printing looks like this; however, when you write, you should write “非.” The third horizontal line on the left side would not shoot through the vertical line.

On the contrary, 「珈琲」has some kind of retro, nostalgic nuance.

There are two kinds of café in Japan. One is 喫茶店(Kissaten) and one in カフェ(kafe). The law clearly distinguishes them for what variety of drinks or foods they can serve; however, there is something more. The impression of 喫茶店 is retro, classic, and nostalgic. It sometimes makes you feel like you went back to the past. カフェ sounds more new and fashionable, stylish, and serves various kinds of drinks or meals. 喫茶店 has an image as a place for adults – or young people who like the culture. The inside is quite dim. It tends to be quiet, and you could enjoy the time escaping from the hustle and bustle of the city there. カフェ sounds like a place for the younger generation. In 喫茶店, they serve you pour-over coffee or coffee made with a siphon coffee maker. You seldom, or maybe never, find Espresso there.

Here are some typical images for 喫茶店. 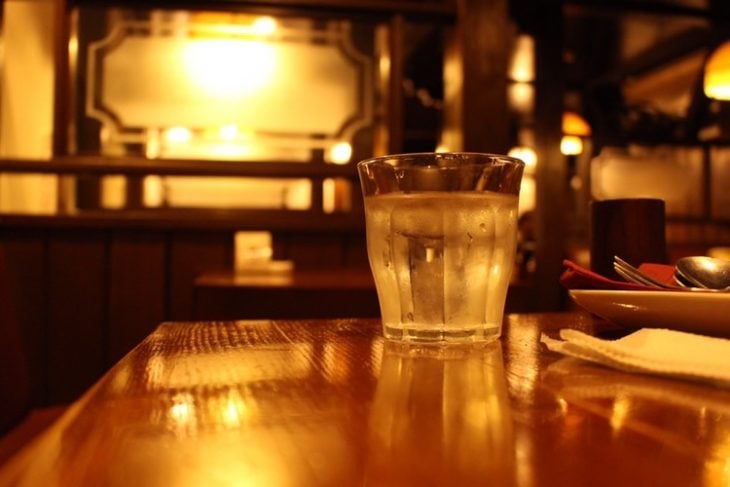 A dim and quiet place to drink coffee 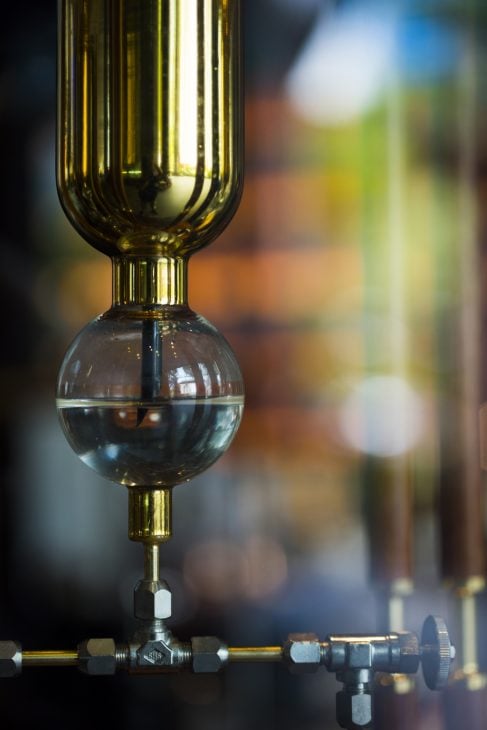 The characters 「コーヒー」 could be found all over Japan, including カフェ. If you go to Starbucks or Tully’s coffee, they have menus for コーヒー.

You might find the characters「珈琲」on 喫茶店’s menu because the image of the word perfectly fits with that of 喫茶店.

However, no matter whether you are in カフェ or 喫茶店, other famous coffee beverages are written in Katakana that mimics the original sound.

Please be noted that if you are in Japan, 「コーヒー」or「珈琲」never means Espresso.

If you want to drink Espresso, just say 「エスプレッソください。(Esupuresso kudasai)

How Japanese people came to use the characters “珈琲”

From the mid-17th century to the mid-19th century, Japan was not open to foreign countries to ban Christianity and control the trade. This policy is called 鎖国(Sakoku). No Japanese were allowed to go overseas, and international trade was prohibited except with China and the Netherlands in a minimal area in Nagasaki.

Coffee was introduced by Dutch at that time, which was called “koffie” in their languages. Japanese people tried to think about how to write it in Kanji. However, none of them became a household word. Then a scholar studying Western knowledge through Dutch documents proposed the Kanji “珈琲.” His name is 宇田川榕菴 (Udagawa Yōan). He thought that the coffee beans on its tree look like a Japanese hair ornament “簪”(Kanzashi), or “かんざし” in Hiragana. 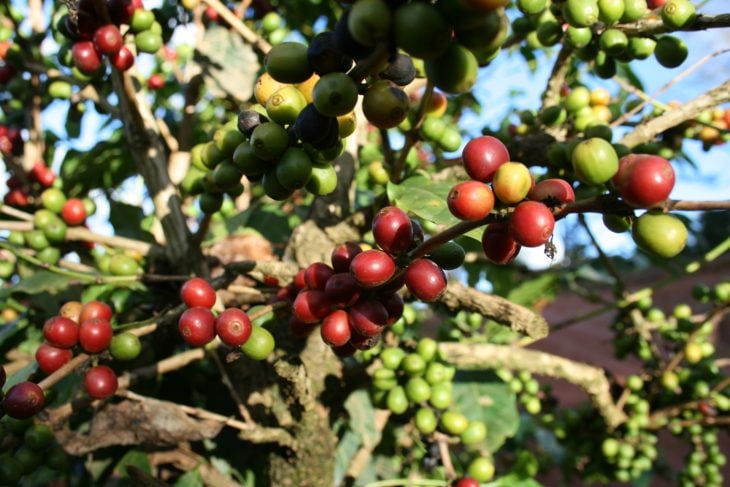 Coffee beans on a tree 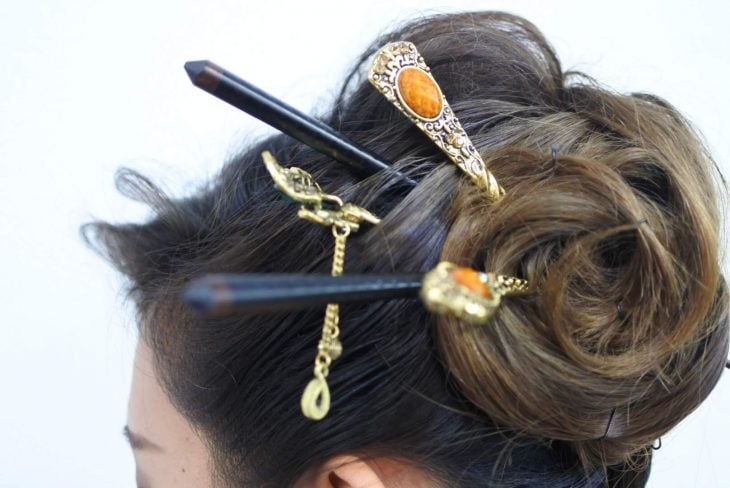 The original sound of “珈” is “Ka,” and that of “琲” is “Hi.” “珈” means “hair ornament” or “Kanzashi,” and “琲” means the string that connects the gems of Kanzashi. Therefore, Kanji “珈琲” mimics the original sound, and at the same time, it combines the image of coffee beans on its tree with Japanese traditional hair ornament. This romantic selection of Kanji took root among people and still used until today.

By the way, Japanese people seldom use Kanzashi with gems today. If you would like to find more about Kanzashi used today, I would like to introduce a shop that specializes in Kanzashi. Some are suitable for kimonos, and some are for daily use.

Is there any Kanji for Starbucks? Comparing Starbucks in China and Japan

If you have ever been to China, you should have seen Kanji (“Hànzì” in Chinese), or Chinese characters, for Starbucks. Starbucks Coffee is written “星巴克咖啡” and pronounced “Xíngbākè kāfēi. The character “星” means “star,” and “巴克” mimics the sound of “bucks.” “咖啡” is the word for coffee in Chinese. Therefore, the Chinese name for Starbucks is a mixture of the meaning and the original sound.

Also, the menu is in Chinese characters only. For example, “Caffe Americano” is “美式咖啡”(美 stands for the US and 式 means “style”), reflecting the original meaning. On the other hand, some drinks mimic the western sound, such as “拿铁”(Nátiě) for Caffè Latte, “摩卡”(Mókǎ) for Caffè Mocha and”卡布奇诺”(Kǎbùqínuò) for Cappuccino.

Frappuccino, a trademarked brand of the Starbucks Corporation, is written “星冰乐”(Xíngbīnglè). “冰” means “ice” and “乐”(same Kanji with 楽 in Japanese) means “joyful” or “happy.” From these characters, you can imagine a drink something unique to Starbucks, iced, and delicious that makes you happy. 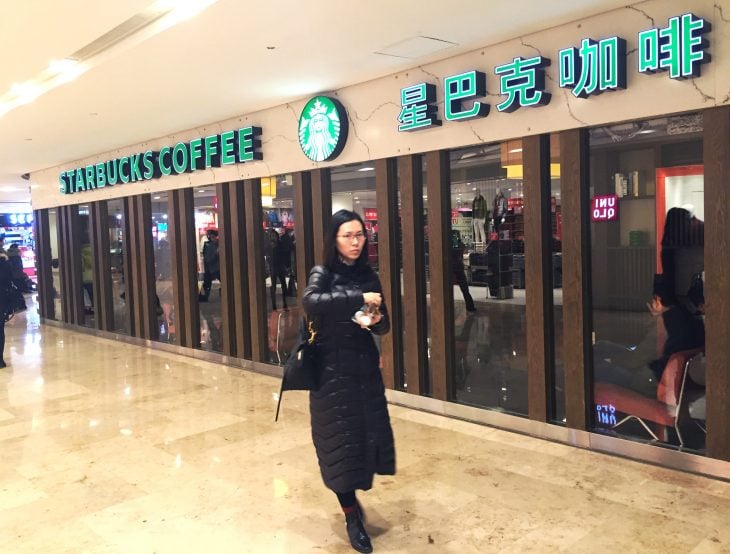 How about in Japan? Unfortunately, there is no Kanji for Starbucks. The brand name is written in Katakana “スターバックスコーヒー”(Sutābakkusu kōhī)

and just mimics the sound. However, there is no Katakana at the front of the café. You can see only the alphabets “STARBUCKS COFFEE.” Japanese people love to abbreviate words, and Starbucks is often called “スタバ”(Sutaba). 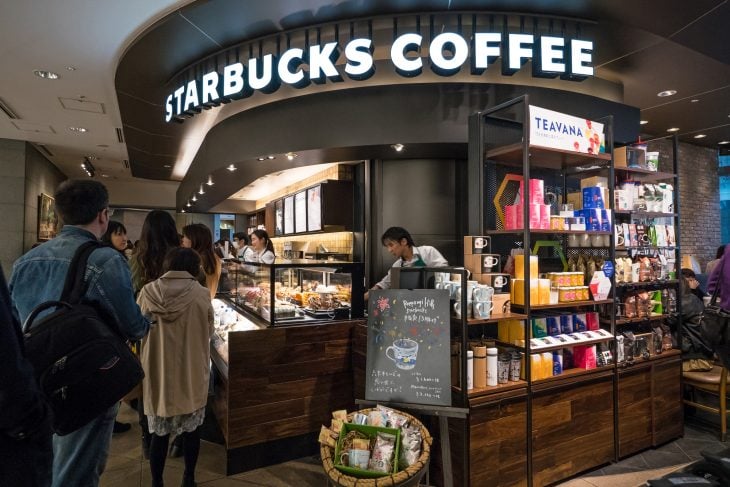 The menu is written in Katakana except for drinks or food using something Japanese, for example, Yuzu(using Kanji柚子 is the most common way of writing in Japanese but somehow written in Hiragana on their menu) or Maccha(抹茶). Frappuccino is written “フラペチーノ”(furapecchīno).

What makes the difference? When importing Western words, the Chinese language tends to use only Chinese characters. On the other hand, the modern Japanese language tends to use Katakana and try to mimic the original sound. But the most important part is, there is a tendency in Japanese culture to use Katakana when you want to make the word sound new and stylish, especially for the words from the Western countries. It may be the Starbucks’ strategy to use Katakana in Japan to make its brand image more fashionable.

If you have a chance to visit Japan, I highly recommend that you should visit both カフェ and 喫茶店 and feel the difference by yourself. Especially, 喫茶店 is one kind of Japanese culture.

Many of them may not have an English menu, but no problem!

」and they will understand it.

If you worry about the price, you can just ask「～はいくらですか？(～ wa ikura desu ka)」

If you drink one cup of coffee in a café in a fancy hotel, maybe it costs more than 1,000 yen, which is extremely expensive. There may be some hotels with excellent coffee, but the price is mainly for the high-grade service and location fee. However, if you go downtown and visit an ordinary 喫茶店 or カフェ, they will serve you a cup of coffee for about 450~650 yen. Please find a comfortable 喫茶店 or カフェ that you could use as a hideaway and relieve the weariness of the travel.

Especially in Nagoya, you should definitely experience the culture of モーニング(mōningu). 喫茶店 in Nagoya are open from early morning and serves a light breakfast with a cup of coffee at a very low price. You could watch how the locals enjoy the morning time. 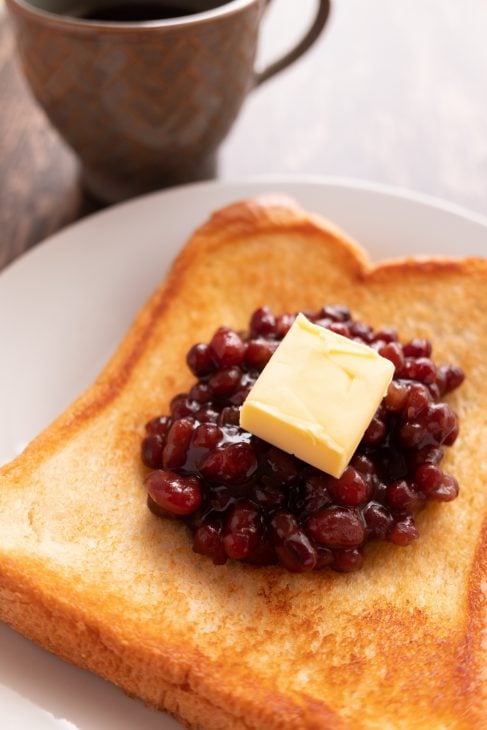 . Sweet red bean paste and butter are on the toast.小倉トースト(Ogura tōsuto)

is also famous. You spread butter first on the toast and then add the red bean paste on.

I would like to give you just one piece of advice. Smoking is allowed in many 喫茶店. If you don’t like the smoke, I recommend that you should check in advance on the Internet.